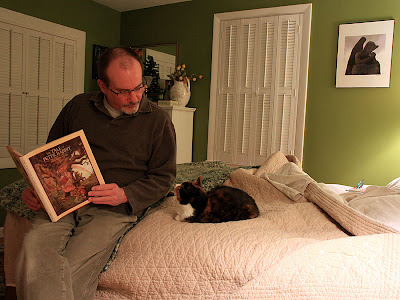 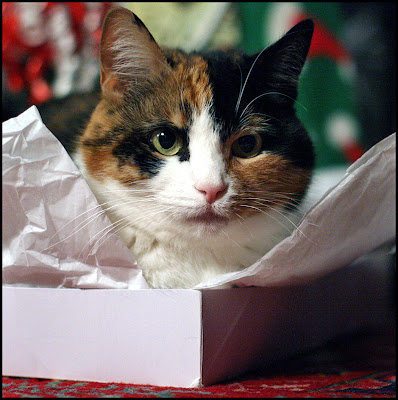 May Peace and Love be always with you!
Posted by Nadine at Saturday, December 25, 2010 No comments:

It's December and it's cold and you can often find me near the heat vent! 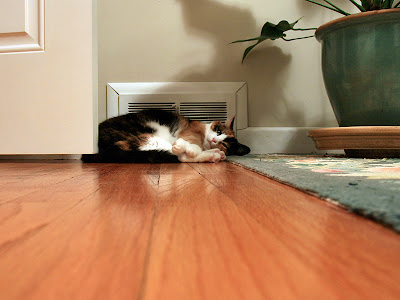 Yesterday, December 1st, I helped Susan and Bruce put up a Christmas Tree in the living room. 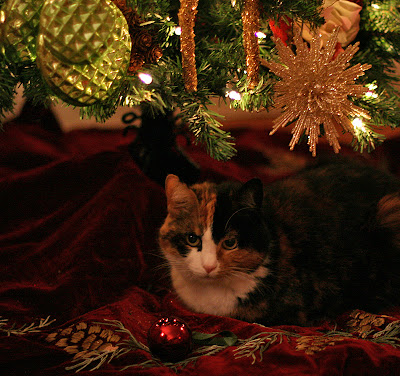 It was much fun and it got me thinking of something Bruce wrote a few years ago. As best as I can remember, it went:
"I am driving behind a truck of Christmas trees. I can count one hundred tree trunks, but it is a long truck, so I guess there are approximately 300 Christmas trees from near and distant woods and forest, loaded and strapped down for their trip south; soon to find themselves on display in 300 homes. "Take Me. Take Me," says one tree. "Oh, No. Please take Me," says another. And a little boy and girl exclaim, "This one. This one is magnificent."

"So I continue to follow the truck of trees and later, at night, I research some history of evergreens and find:

"The Egyptians were part of a long line of cultures that treasured and worshiped evergreens. When the winter solstice arrived, they brought green date palm leaves into their homes to symbolize life's triumph over death. The Romans celebrated the winter solstice with a feast called Saturnalia in honor of Saturnus, the god of agriculture. They decorated their houses with greens and lights and exchanged gifts. They gave coins for prosperity, pastries for happiness, and lamps to light one's journey through life. Centuries ago in Great Britain, woods priests called Druids used evergreens during mysterious winter solstice rituals. The Druids used holly and mistletoe as symbols of eternal life, and placed evergreen branches over doors to keep away evil spirits.

"Late in the Middle Ages, Germans and Scandinavians placed evergreen trees inside their homes or just outside their doors to show their hope in the forthcoming spring. Our modern Christmas tree evolved from these early traditions. The fir tree has a long association with Christianity, it began in Germany almost a 1000 years ago when St Boniface, who converted the German people to Christianity, was said to have come across a group of pagans worshiping an oak tree. In anger, St Boniface is said to have cut down the oak tree and to his amazement a young fir tree sprung up from the roots of the oak tree. St Boniface took this as a sign of the Christian faith. But it was not until the 16th century that fir trees were brought indoors at Christmas time.

"Legend has it that Martin Luther began the tradition of decorating trees to celebrate Christmas. One crisp Christmas Eve, about the year 1500, he was walking through snow-covered woods and was struck by the beauty of a group of small evergreens. Their branches, dusted with snow, shimmered in the moonlight. After his banishment from the Catholic church he spent a great deal of time walking through the  forests of evergreen conifers thinking through his beliefs. The candles are said to have represented the stars which were seen by him through the trees. When he got home, he set up a little fir tree indoors so he could share this story with his children. He decorated it with candles, which he lighted in honor of Christ's birth.

"The first appearance of a Tannenbaum was recorded in Germany many years after Luther's death. It was in 1605 in Strasbourg in Alsace, then in Germany, that a chronicler wrote (in old German): "Auff Weihenachten richtett man Dahnnenbäum zu Strasburg in den Stuben auff..." ("At Christmas they set up Christmas trees in their rooms...")

Had they but courage
Equal to desire

Do you have courage equal to desire? I would love to hear from you!
Posted by Nadine at Thursday, December 02, 2010 No comments:

Yesterday morning I woke up to discover that my Facebook account had been disabled (once again) because I am not an "entity." I am not sure what that words means in this situation but I am a cat; the cat Nadine. 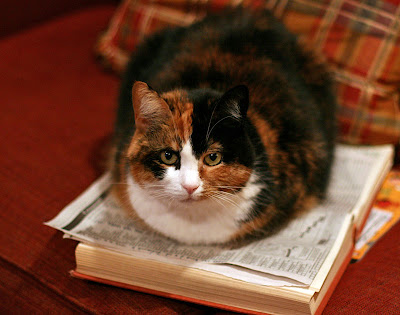 Well, they are not really mine, Nadine's, The Cat Nadine; they are Bruce's--but they featured moi, Nadine. 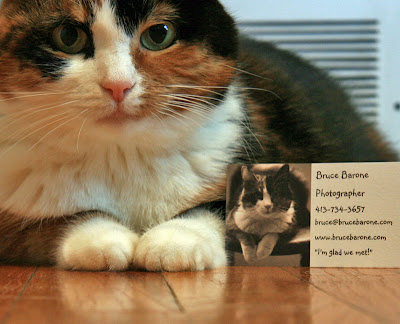 But I am trying to be a photographer.

"Bruce, is this the shutter button?" 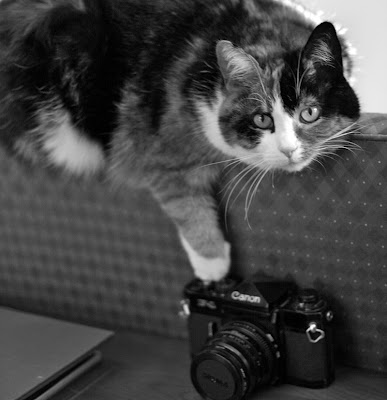 What do you think of the new Business Cards? I would love to hear from you!!!
Posted by Nadine at Saturday, November 13, 2010 7 comments:

Not for me, actually, but for Bruce; he's going to feature me, Nadine, The Cat Nadine, on a new business card. I don't know what photograph he is going to use on the business card but I have always liked this one: 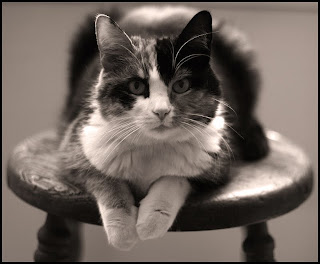 Do you like this photograph? I would love to hear from you!
Posted by Nadine at Monday, November 01, 2010 No comments: